May 16 this year is a special day for me. It marks the 30th anniversary of the first performance of the Ontario Bi-Centennial Show that I wrote back in 1984.  The show was commissioned by the Ontario government, produced by Humber College, and cast with Humber students. I wrote the entire show (words and music), and Ron Collier’s arranging students scored my charts.  Don Calderwood and Paula Gallivan directed and choreographed it.

The show premiered on May 16, 1984 in Bothwell, Ontario, and played again the next day in Petrolia. Then on a schedule of four locations per week (from May to Labour Day), it toured the whole province. The cast of 12 and the 8-piece band travelled in a large school bus. Two tractor-trailers were needed to transport all the portable stage, lights, sound equipment, props and costumes for this huge undertaking. The cast and musicians performed to a high standard, and I was proud of the show and everyone involved in it. I heard that the government and the college were pleased with the outcome as well. 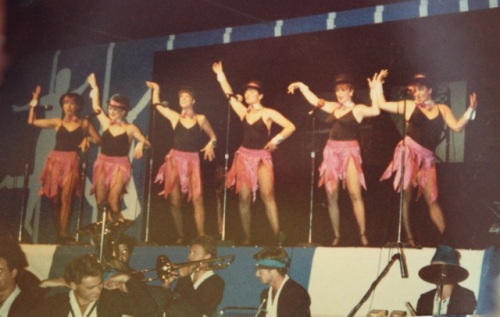 However, all along the way the question kept getting asked: “The bicentennial of what?”  The truth is – to us at the time, the answer was immaterial.  We were performers, not historians. Give us a budget, a theme, and a venue, and we set our focus on the performance.

The official answer was that it was the 200th anniversary of the arrival of the United Empire Loyalists in Ontario. I later heard that the province’s history had been “massaged” a little to provide a convenient promotional opportunity in a pre-election year. No matter. It was a feel-good event.  And it was built up to be so big that the Queen was even invited to come to Canada (about a month after our show closed) to participate in a tree-planting ceremony at the Legislative Building.

But back to our show – of which I am still very proud.  Do any of you have any memories of it to share?  Please leave a comment below.