After the terrible fire at Chateau Gai, which turned my new charts into ashes and left me jobless, the summer of 1940 was not looking very promising from a music point of view. But when luck smiles on me, it is usually ear to ear. That same week I received a call from young Denny Vaughan.  Hearing about our situation, he informed me of two job openings at the Beaumaris Yacht Club on LakeMuskoka. They were looking for a trumpet player and a pianist for their dance band. It would be 4 nights a week, for a salary of $12 per week, plus room and board. Fred Davis and I grabbed the opportunity.

The band, which was a pick up group, played stock arrangements – and did so quite well. The group was fronted by a non-musical business man who, though he looked the part, most likely got the job because of his business connections rather than his musicianship. Our ballroom, complete with balcony overlooking the lake, occupied the entire second floor of the 1911 yacht club building.

The area of LakeMuskoka near Beaumaris was popular with wealthy American bankers and steel tycoons– almost all from Pennsylvania. They built lavish mansions along miles of shoreline, and it wasn’t hard to see why the area earned the nicknames “Little Pittsburg” and “Millionaire’s Row.”  (Although today it would have to be called “Billionaires’ Row” to have the same meaning.)

The Beaumaris Hotel, where we had our lodging, was up on the hillside a fair distance from the yacht club. There was a very distinct separation between the status of the patrons and that of the employees, and we were quickly informed of the “rules of the establishment.”  The hotel’s front grounds and lobby were for the guests only. Musicians were on the same social tier as maids and kitchen staff, and as such our only access was through the back door. We were also required to walk the back path down to work, rather than the shorter route down the front.

While the hotel catered to tourists, the ballroom was frequented by the wealthy Americans from the surrounding area. Reminiscent of the novels by F. Scott Fitzgerald, they would arrive in style — in our case by boat. I remember watching from the balcony as the beautiful Muskoka cruisers pulled up one by one to the dock. They were magnificent hand-crafted powerboats finished in gleaming mahogany. To my surprise, almost all were chauffeur-driven. The men with the caps would wait 3 hours, like livery people used to do, for their employers to have their fill of alcohol and dancing, then drive them back to their cottage estates.

Beaumaris was my first taste of how very different the world was for the fabulously rich. I really didn’t know that lifestyle existed prior to this. (And if you are thinking to yourself, “Howard, didn’t you at least catch a glimpse of that lifestyle on TV?” Remember that households didn’t have television yet.)

All in all, this dance gig provided a great opportunity for all the members of the band. Not only were we teenagers who were being put up in a hotel, but we got to play dances in beautiful Muskoka all summer long.  We played 4 nights a week, and had the rest of the time for ourselves.  Fred spent his free time socializing, while the other guys did the typical things that teenage boys do while away from adult supervision.

And me? I sat on the upper balcony of the yacht club re-writing my lost arrangements. 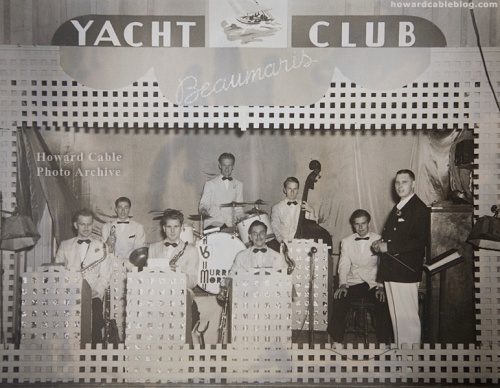